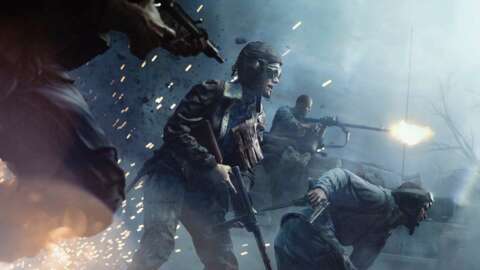 EA is hard at work teasing the next Battlefield game, a campaign that appears to include glitchy messages in previous entries in the series. This all seemed to start when the official Battlefield Twitter account posted a strange message and a link to a YouTube livestream that will air on June 9 at 7 AM PT / 10 AM ET. The stream is counting down to the reveal trailer for the next Battlefield game.

Such tweets are relatively common in similar marketing campaigns. However, EA appeared to take matters further by including this video tease when booting up previous games in the series, including Battlefield 5, Battlefield 1, and Battlefield 4. This followed a teaser sent to influencers that contained a scrambled transmission that claimed that “war is the only way home.”

All of this marketing build-up has followed in the wake of a number of supposed Battlefield 6 leaks, including screenshots, trailer audio, and even a fake trailer itself. It’s not necessarily clear if any of these leaks are legitimate, but EA has confirmed that a new Battlefield game will release this holiday. Several sources have claimed that the game will take place in the year 2042, hence the name Battlefield 2042. Additionally, the official Xbox Twitter account posted a video teaser, which has led some to speculate that the game will be available on Xbox Game Pass.