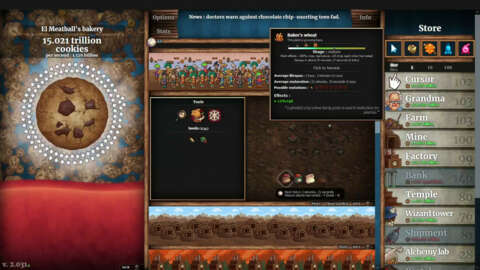 While Cookie Clicker might not be the most technically advanced game ever, an excessively long achievement name hidden in the game suggests the developers had a lot of fun porting it to Steam. The absurd achievement was picked up by Wario64 on Twitter, who noted that the remaster of the iconic clicker game was released today to Steam.

“There’s really no hard limit to how long these achievement names can be and to be quite honest I’m rather curious to see how far we can go,” the achievement begins. “Adolphus W. Green (1844 – 1917) started as the Principal of the Groton School in 1864. By 1865, he became second assistant librarian at the New York Mercantile Library; from 1867 to 1869, he was promoted to full librarian. From 1869 to 1873, he worked for Evarts, Southmayd & Choate, a law firm co-founded by William M. Evarts, Charles Ferdinand Southmayd and Joseph Hodges Choate. He was admitted to the New York State Bar Association in 1873. Anyway, how’s your day been?”

The paragraph in the middle is paraphrased from the Wikipedia page for Adolphus W. Green, who went on from his legal beginnings to found the National Biscuit Company, AKA Nabisco.

While the wordy and educational text may have set a record for the longest Steam achievement name, the achievement itself outdates the Steam port. It’s been part of the game’s baked-in achievement system since they were introduced in version 1.026.

The achievement is gained by reaching the milestone of 10 sextillion cookies baked per second, not that you’d be able to tell that from the name. Interestingly, the next achievement in this progression, gained for baking 1 septillion cookies in one second, is simply called “Fast.”

Despite its ostensibly simple mechanics, Cookie Clicker boasts eight years of being “very actively developed,” and is now available on Steam for $4.99.