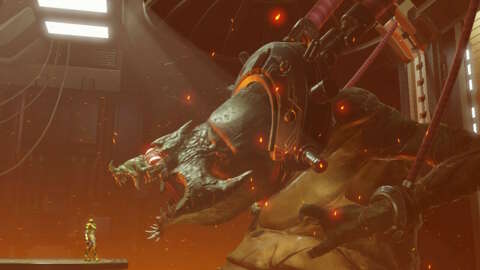 Speedrunning is nothing new to Metroid. Ever since the original game locked endings, or increasingly bare outfits for Samus, behind completion times, there has been an enthusiasm for finishing the games as quickly as possible. Metroid Dread is no exception. What makes the new release novel is the explicit encouragement from developers MercurySteam and Nintendo EPD by rewarding classic speedrunning techniques with hidden content. A clever sequence break makes fighting Kraid, an early boss fight, significantly easier.

Sequence breaking is when a player goes out of the main path, which they are supposed to go down, in order to get powerful items earlier in the game than intended for most players. Sometimes, sequence breaks rely on glitches. Clipping through a wall or exploiting a tricky jump can allow access to new areas. Sometimes though, they rely on a thorough knowledge of how the game works and a little extra skill to navigate a tricky area.

In Metroid Dread, grabbing a couple items early will let you defeat Kraid significantly more quickly. This technique requires no meta-game trickery, implying that the designers explicitly intended players to utilize the exploit. As outlined by YouTuber TheSeventhForce, the technique requires that the player obtain the series’ iconic grapple beam ahead of time. The beam allows Samus to pull items out of the way and to hook on to grapple points. Using the beam enables Samus to make her way to the Morph Ball Bombs. Without the exploit, players will only find the bombs after the Kraid fight, but a little maneuvering will help grab them early.

In the Kraid boss fight itself is where the Morph Ball Bombs come in handy. After the battle’s first phase, where Kraid is chained up and shooting his claws and gassy bombs at Samus, a cutscene will play. Shortly thereafter, Kraid’s stomach is exposed complete with a gaping wound. If Samus backs into the wall in Morph Ball form, a cannon will appear and launch her directly into the boss monster’s stomach. A few drops of Morph Ball Bombs and the fight will be over in seconds.

While such shenanigans are in no way new to Metroid, it is a real treat to see the developers explicitly build in sequence breaks into a sure-to-be popular speedrunning title. Several such techniques, whether intentional or not, are sure to be found as more and more speedrunners tackle the game. In the meantime, check out GameSpot’s review of Metroid Dread, which calls it “a triumphant return for the bounty hunter.”