Skip to content
Homepage / Check it out / Mass Effect: Corsair Would Have Been First-Person Space Sim For The Nintendo DS 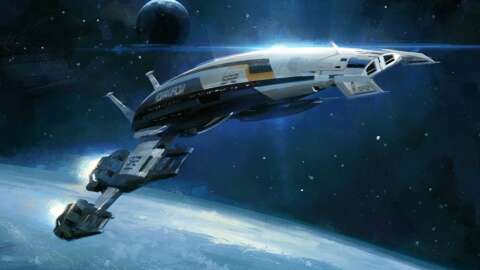 A Mass Effect spin-off for the Nintendo DS that would have had players explore the galaxy as a space pirate was once in development at BioWare, according to a new interview with former longtime BioWare employee Mark Darrah.

“You would have a ship, you would be independent, more like a Han Solo character, not a Spectre,” Darrah says in a new interview with MinnMax. “You would be flying around, picking up cargo, exploring. You could explore and sell that information back to the human Alliance.”

The game would have taken place in a part of the Mass Effect galaxy that was less-fully explored and more of the Wild West, something that sounds similar to the idea of the Outer Rim in Star Wars. Darrah says the idea behind the game was inspired by PC classic Star Control, and would have been played from the first-person perspective and featured ship combat.

“Pretty much all we had was the beginning of the flight controls, we didn’t really have the rest of that game put together,” Darrah goes on to say. “We were figuring out how it worked from an IP perspective still.

“It didn’t quite fit exactly into the IP, because the way FTL works in Mass Effect is a little different,” Darrah says. “I think we could have made it go, and the reality of it is you can usually massage an IP, if everyone is on board and excited, you can make it make sense.”

The main reason the game never saw the light of day, Darrah says, can be attributed to the economics of the Nintendo DS. Darrah explains that the game would have needed the most expensive cartridge available for the platform, and that because DS games only sold for around $30, the profit margins would have been incredibly small. EA internally projected Mass Effect: Corsair would only sell around 50,000 copies, according to Darrah, and so the project was killed.

Darrah worked at BioWare for more than two decades, and when he left the company in December of 2020 alongside BioWare general manager Casey Hudson, he was overseeing the Dragon Age franchise. Both Mass Effect and Dragon Age have new games in development. Hudson, who directed the first three Mass Effect games, recently announced his new game studio, Humanoid Studios.