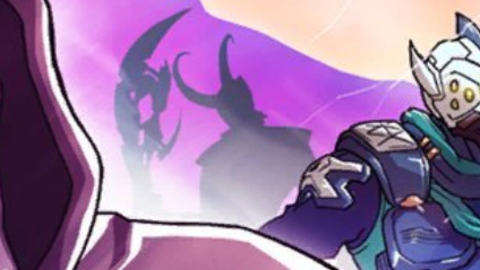 The undeniable look of Marvel’s Loki wearing his horned crown has been spotted in a recent Fortnite teaser, which suggests the god of mischief is scheduled to arrive on the island sometime in the future. First spotted by dataminer Hypex, a silhouette of what appears to be Loki can be seen in the background of a recent in-game image.

Loki’s addition should surprise no one after Marvel and Fortnite have collaborated closely for the past several years, and the crossovers went to another level during Chapter 2 Season 4, where the Battle Pass featured Marvel heroes and items exclusively. Epic has previously stated it has plans with Disney to feature Marvel and Star Wars content for years to come, and even as more DC Comics heroes and villains are on the way, it stands to reason Loki isn’t far off either.

Marvel’s Loki, the Disney+ live-action series, will premiere on June 9, just one day after Fortnite Season 7 is expected to begin. There’s a very good chance that Loki is either featured in the Battle Pass right away, perhaps at Tier 1 like The Mandolorian was during Season 5, or that he’s the midseason secret character a la Neymar Jr. in Season 6.

While Loki’s signature look is inarguably present in the image, eagle-eyed fans also believe they’ve found evidence of the modern MCU Thor too, perhaps suggesting the god of thunder will get a new skin or style during Season 7 as well. Thor’s short hair and sleeveless armor could be what we’re seeing here, though it’s not quite as distinct as Loki’s lavish headgear.

Thor was previously featured as the Tier 1 Battle Pass character in Chapter 2 Season 4, but it was a unique design that stayed truer to his long-haired comic style. It’s not unprecedented for licensed characters to get new looks in the game. We’re up to four Batmans already if you count the forthcoming Armored Batman, so another Thor to pair with Loki is a real possibility for Season 7.

In other Fortnite news, Epic has begun teasing the possible alien theme of Season 7 through new Foreshadowing Quests.