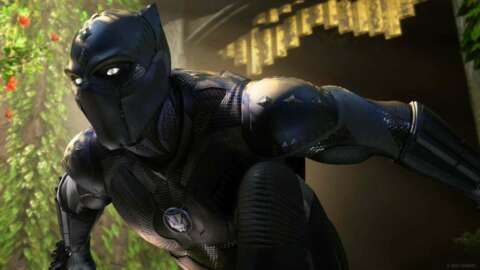 Publisher Square Enix has revealed that Marvel’s Avengers’ upcoming expansion, Black Panther: War for Wakanda, launches for free on all platforms on August 17. The add-on content will not only introduce Black Panther as a playable hero but also add new enemies, missions, and villains.

The War for Wakanda DLC includes a bevy of additional content, like a new environment to explore in Wakanda, another outpost known as The Golden City, and more solo and multiplayer Drop Zone and Threat Sector missions. According to a Square Enix press release, Black Panther: War for Wakanda adds “the most content to Marvel’s Avengers since the game’s launch.”

Now Playing: Marvel’s Avengers’ Black Panther DLC Is Its Biggest Expansion Yet | Play For All 2021

To break everything in War for Wakanda down, developer Crystal Dynamics will host a Marvel’s Avengers War Table livestream on August 16 at 10 AM PT / 1 PM ET on the studio’s Twitch channel. Fans can expect an overview of Black Panther’s move set, as well as a look at the new country of Wakanda.

Black Panther, voiced by Kratos’ Christopher Judge, will be the game’s third playable character following Clint Barton and Kate Bishop’s addition. Spider-Man is still on the horizon, though Crystal Dynamics said back in March that the web-slinger wouldn’t join the game’s roster until sometime after summer.

In other Marvel’s Avengers news, the game is available to play for free until August 1 on PC, PlayStation 4, PlayStation 5, and Stadia. (Square Enix said Xbox players will have their own free-play opportunity “in the coming months.”) This free-play period coincides with the permanent inclusion of duplicating heroes, a feature first introduced back in April that now cannot be toggled on or off.

Marvel’s Avengers: How To Find And Play As Spider-Man