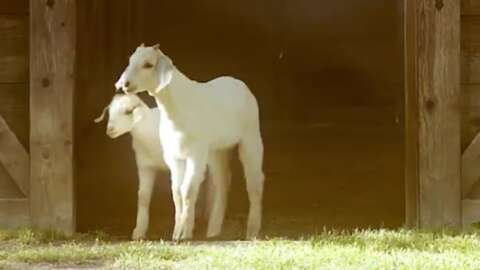 Madden NFL 22 may include two all-time greats as its dual cover stars, if a recent teaser video is any indication. Promising an announcement to come on June 17 at 7 AM PT / 10 AM ET, the video shows not one but two goats. GOATs, get it?

As sports fans know, GOAT stands for “Greatest of All Time.” It’s an acronym that has been applied to all-time stars like Tom Brady, who himself was the cover athlete for Madden NFL 18. Typically the cover athlete honor is applied to recent Super Bowl winners and MVPs, like the two most recent cover stars, Patrick Mahomes (Madden 20) and Lamar Jackson (Madden 21).

The teaser video shows two goats, suggesting the next Madden will feature two all-star players. We’ll likely know more about who those two all-stars might be on June 17.

EA CEO Andrew Wilson recently said the Madden 22 cover would be “a little different” from the usual. Having two cover athletes represented would certainly fit the bill, even without the implication that these will be two “Greatest of All Time” star athletes.

“We’re going to do something a little different with the cover this year,” Wilson said. “I won’t say any more than that. Other than to say, I’m really proud of the work the team has done–both with the game, with the cover, and with the marketing that we’re going to build around Madden.”