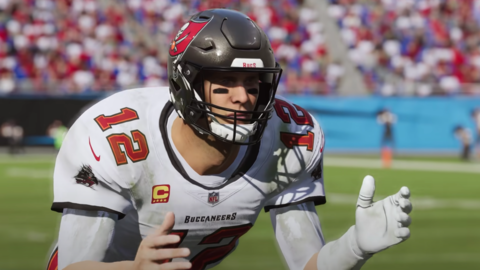 EA Sports has given Tom Brady a ratings improvement in Madden NFL 22 after he set a new NFL passing record over the weekend. Brady received a temporary two-point bump to his overall rating from 97 to 99 to reflect his real-world achievement.

This is the first time since Madden 19 that Brady has been rated 99 in Madden. Brady’s mid-throw accuracy (98) and deep throw accuracy (99) have also been improved. Brady’s elevation to 99 OVR is a temporary boost meant to celebrate the new NFL record, so he will revert back to 97 in the future, it seems.

Brady surpassed Drew Brees to set the all-time career passing yards record (80,560 yards) on Sunday in his return to New England where his Buccaneers beat the Patriots 19-17. Ben Roethlisberger of the Pittsburgh Steelers is the next closet active player with 61,381 passing yards.

Brady’s Buccaneers won Super Bowl LV and have among the best odds to repeat as Super Bowl champions this year, according to sportsbooks. Brady is on the cover of Madden NFL 22 alongside Kansas City Chiefs QB Patrick Mahomes.

In other EA Sports news, the developer has announced that it is exploring the possibility of abandoning the FIFA name for its football series. With its rights agreement set to expire in 2022, EA said it might move forward without FIFA’s branding for future installments.