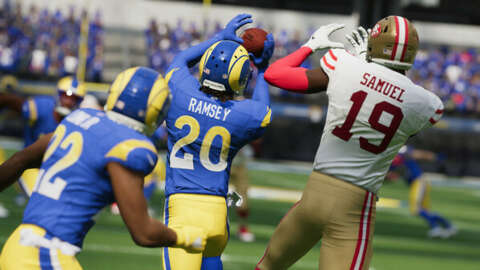 More player ratings have been revealed for Madden NFL 22, and this time they focus on the defensive backs. The cornerbacks and safeties are both key to protecting against long throws and stopping breakthrough rushes, and the list even includes the newest member of the 99 club.

Among the top five cornerbacks, Jalen Ramsey clocks in with a 99 OVR rating, following by Stephen Gilmore at 97, Jaire Alexander at 95, Tre’Davious White at 93, and Marlon Humphrey 92.

The full top 10 list is below. These numbers are only applicable to the beginning of the season and will change based on how their real-world counterparts perform.

Safeties are categorized separately, and while there aren’t any 99-rated players, there are still some fantastic picks to solidify the middle of the field. Tyrann Mathieu leads the way with 95, followed by Budda Baker with 93, Devin McCourty with 92, Jessie Bates III with 91, and Justin Simmons with 91. The full top 10 list is below.

For more Madden 22 ratings, you can check out the highest-rated running backs, edge-rushers, tight ends, as well as a roundup of all the top ratings thus far.

Madden NFL 22 will be available on August 20 for PC, consoles, and Stadia. You can use our Madden 22 preorder guide now.

Madden 22 Gets A New Cover Star For The Holidays, And It’s Legendary Player Bo Jackson