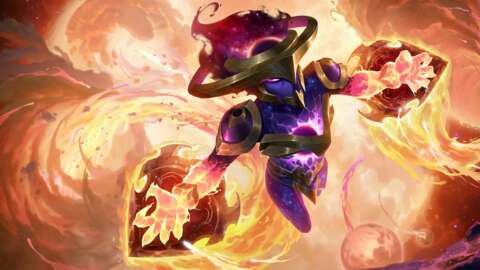 Riot Games has released the notes for Legends of Runeterra’s upcoming Patch 2.90, and if you’ve enjoyed Irelia and Azir’s recent reign of dominance, we have bad news for you.

The Follower and Spell that make the Irelia/Azir deck so powerful–Blossoming Blade and Inspiring Marshal–are seeing an increase in summoning cost and an adjustment in stats, which will have a big impact on the deck going forward.

Riot cited internal data as the reason for the change, saying “our most recent information indicates the deck is just too powerful, so we’re making two very targeted changes. We hope to maintain the fun while opening up opportunities for other strategies and to reduce the frustration of playing against it.”

Heroes receiving buffs include Taliyah, who will see base stats adjusted at levels 1 and 2, and Malphite, who needs two fewer mana summons to level up. These changes, according to Riot, were made to make the combo more viable in the competitive meta, saying “Taliyah should feel a little more sturdy and Malphite should level up more consistently.”

Other changes in Patch 2.90 include new Champions coming to the Labs, a handful of bug fixes, and the removal of Cross-Shard Friend Challenge, which Riot dubbed “outdated tech.”

Legends of Runeterra is a digital collectible card game based in the League of Legends universe. It was named iPad Game of the Year by Apple as part of the company’s App Store Best Of 2020 awards.

The full patch notes for Patch 2.90 can be found below.

We’ve seen a lot of conversation in the community lately on the topic of live design; players are passionate about it, and we’re passionate about it as well. We believe that live design is strongly connected to one of our fundamental beliefs, which is that every player should be able to have access to all cards and all decks without spending money. That fundamental aspect of Legends of Runeterra unlocks our team to be able to make card updates without punishing players for past card and deck acquisition choices.

Ultimately, our goal is to make Legends of Runeterra the most fun we can. When making live design decisions, we don’t focus on any single aspect. We use complex data models on card usage, region usage, win rates, deck lists, performance versus specific decks, different formats, different ranks, win rate disparity, performance over time, etc. We also consider a complex model of how decks feel relative to the meta, and we survey the community regularly to learn how players feel about cards, specific decks, archetypes, metagame health, game modes, cosmetics, future game content ideas… the list goes on and on.

We try to focus our changes to be as targeted as possible and to avoid collateral damage or unintended consequences to decks we don’t want to affect. Making a small amount of changes can have large impacts on the metagame. We also try to let the community find new ways to evolve playstyles and the metagame to change over time without live design card changes. One of the amazing things about the card game genre is the ability the community has to explore and discover new strategies that can dramatically shift the meta over time without any card changes. That process is fun, and we don’t want to artificially disrupt that process by implementing live design card changes too quickly or too often.

However, there are times when it’s clear that changes are necessary to ensure the experience is fun and exciting. Taliyah and Malphite are both clear examples that need live design attention. It’s an easy decision to make, because so many of our inputs into the decision making process clearly indicate that Taliyah, Malphite, and their primary deck are not meeting our standard. Irelia and Azir are not so obvious, because there are different inputs that contradict each other and it takes time to gather information to make a decision. In the first three weeks of Guardians of the Ancient we have seen Irelia and Azir’s deck rise and fall in popularity and efficacy. Over time, our decision on whether or not we should make balance changes on the deck has shifted.

We love the play pattern of Irelia / Azir, as well as Blade Dance. We’ve learned that a ton of players love it too, and we want to keep the feel of the deck intact. However, our most recent information indicates the deck is just too powerful, so we’re making two very targeted changes. We hope to maintain the fun while opening up opportunities for other strategies and to reduce the frustration of playing against it. We’ll continue to monitor the metagame as it evolves and will

We’re always learning and improving Legends of Runeterra and our processes. Sometimes we’ll make mistakes, but we’ll always do our best to listen to all of our players, and improve along the way. We’re all on this journey together, and the community’s passion and love for the game inspires us to always do better. Thanks for the feedback over the last few weeks – keep it coming! -Dovagedys

Both Taliyah and Malphite have struggled to find a home in the meta. We like how the deck plays and these buffs add more power into the champions in a way that shouldn’t drastically change their archetypes. Taliyah should feel a little more sturdy and Malphite should level up more consistently.

It’s become clear that the Irelia and Azir deck is too powerful. Ultimately, we decided to focus our changes on Inspiring Marshal and Blossoming Blade to ensure that our changes focus on this deck. We want to reduce the amount of collateral damage to other decks, such as Azir Burn and Azir/Lucian, both of which we think are healthy for the game. This specific deck will remain on our watch list and we will continue to monitor its performance over time.