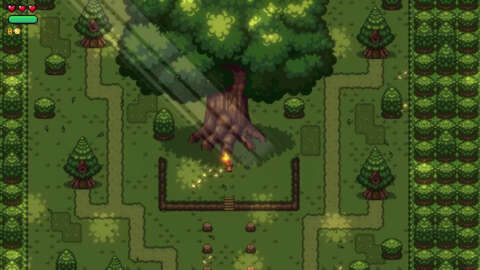 After reaching its Kickstarter goal of €18,000 (about $22,000 USD) within 24 hours, Elementallis has managed to surpass nearly all of its stretch goals too. The Kickstarter for this Legend of Zelda-like dungeon crawler currently sits at just over $100,000 with under 48 hours left in its campaign.

A 2D top-down adventure game, Elementallis sees you play as a young boy who one day inadvertently disrupts the natural balance of the elements that govern the world: fire, nature, wind, earth, water, ice, and lightning. Now, alongside your trusty elemental, you need to set things right. On the game’s Kickstarter page, Elementallis is described as “a story about growth and overcoming guilt.”

In Elementallis, you’ll travel throughout a world composed of separate biomes, each of which hides a dungeon. Discovering and overcoming these dungeons unlocks new elements for your elemental, giving you new ways to engage in the game’s combat, exploration, and puzzle-solving. For example, fire can be used to burn enemies away or brighten up dark places. Elements can be combined as well–you can use water to douse a tough enemy and then shock them for extra damage with lightning, for instance.

In terms of presentation, Elementallis takes inspiration from the Game Boy and SNES era of gaming, though with modern twists. The game features pixel art that takes advantage of modern-day effects like post-processing, particles, and shaders. Its soundtrack (which absolutely slaps) consists of songs composed of both modern orchestral music and nostalgic 8 bit sounds.

Elementallis is being created by designer and programmer Iván Ruiz Lozano, pixel artist Luân Nguyễn Trọng, and composer Raúl Sangonzalo Terrado. The game is scheduled to release for Xbox Series X|S, Xbox One, PS5, PS4, Switch, and PC (Steam and itch.io) in June 2022. If you want to try out the game for yourself, there’s a free demo.