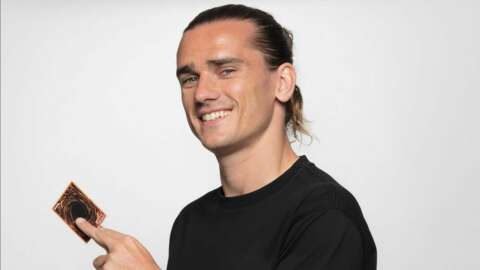 Konami has ended its contract with soccer player Antoine Griezmann after a controversial video appeared to show him and his teammate Ousmane Dembele mocking an Asian staff member while in Japan. As reported by ESPN, Griezmann, who plays for Barcelona, was an ambassador for Yu-Gi-Oh–both the card game and the anime for Konami.

The video was recorded by Dembele in 2019 during Barcelona’s tour of Japan and appears to show both players laughing at technicians attempting to fix a hotel TV. Griezmann does not speak in the video but Dembele makes racist comments about the hotel staff to him. Both are laughing during the video.

Konami said in an official statement, “Konami Digital Entertainment believes, as is the philosophy of sports, that discrimination of any kind is unacceptable. We had announced Griezmann as our Yu-Gi-Oh! content ambassador, however in light of recent events we have decided to cancel the contract.”

The CEO of Rakuten Hiroshi Mikitani, one of the club’s main sponsors, also demanded a full explanation from the club for the video. Both Griezmann and Dembele have made public apologies but have denied any racist intent. Griezmann also has personally apologized to Mikitani.

In his statement, Griezmann said he is “completely against all forms of discrimination” and that he “refuted the accusations made against me and I’m sorry if I have offended any of my Japanese friends.”

Dembele was less apologetic in his statement, saying, “It all took place in Japan, but it could have taken place anywhere on the planet and I would have used the same expression. I was therefore not targeting any community. I just happened to use this type of expression with my friends regardless of their origins.”

Konami has also requested that Barcelona, one of its partners for the PES game series, gives a full briefing about the case and any future actions the club might take against the two players. Barcelona released a statement saying, “FC Barcelona deeply regret the displeasure amongst Japanese and Asian fans and partners of our Club caused by a video that appeared a few days ago on social media in which two first-team players (Ousmane Dembele and Antoine Griezmann) displayed a lack of respect in their attitude towards several employees in the hotel in which they were staying.”

Barcelona continued to say that while both players have already publicly apologized, the club reserves the right to take internal disciplinary action against them.