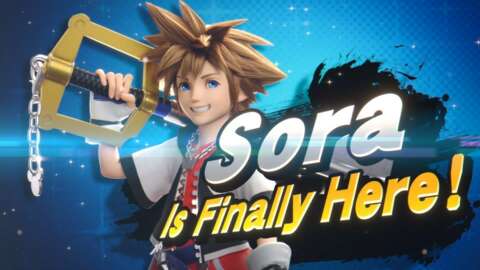 The final DLC character for Super Smash Bros. Ultimate has been unveiled, as game director Masahiro Sakurai announced Sora from Kingdom Hearts as the last addition to the roster.

The 40-minute presentation was dedicated to the Kingdom Hearts hero, showing off his moves, stage, musical selections, and more. Sakurai revealed that Sora is the most requested Smash Bros. character ever, including when Nintendo ran the Smash Bros. Character Ballot in 2014.

Sora’s special moves include multiple magic spells–Firaga, Thundaga, and Blizzaga in a rotating fashion to be specific–as well as Sonic Blade, Aerial Sweep, and Counterattack. His Final Smash is called “Sealing The Keyhole” but it was not shown during the presentation.

Sora’s stage is Hollow Bastion, the final world in the original Kingdom Hearts. The stage floats around the entire structure before shifting to Dive Into The Heart, which features stained-glass style graphics featuring a number of Kingdom Hearts heroes.

Nine songs from the Kingdom Hearts series will feature in their original arrangements, including Scherzo di Notte and Hand in Hand. If you have a save file for Kingdom Hearts: Melody of Memory on your Switch, a swing arrangement of Dearly Beloved will also be included.

The presentation also unveiled the last batch of downloadable Mii Fighter costumes, which include Doom Slayer from Doom and an Octoling wig and Judd the Cat hat from Splatoon. Sakurai also confirmed Amiibo figures for Challenger Pack 2.

Sora joins Min-Min from ARMS, Steve from Minecraft, Sephiroth from Final Fantasy VII, Pyra and Mythra from Xenoblade Chronicles 2, and Kazuya from Tekken in SSBU’s Challenger Pack 2. The first Challenger Pack consisted of Persona 5’s Joker, the Hero from Dragon Quest, Banjo-Kazooie, Terry Bogard from Fatal Fury and The King of Fighters, and Byleth from Fire Emblem: Three Houses.