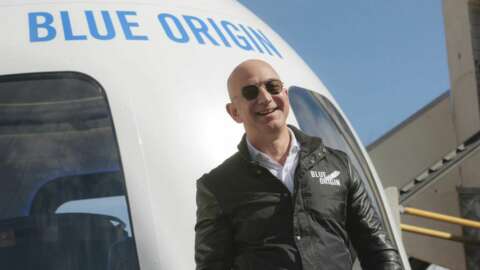 Space, the final frontier that many of us will never reach. Unless you happen to be one of the richest men on the planet that is, as Jeff Bezos is getting ready to catch a rocket into the great void of the cosmos after he steps down as CEO of Amazon.

Bezos announced his temporary departure from the planet on July 20 via an Instagram video, in which he revealed that he and his brother Mark Bezos will be part of the crew of the New Shepard rocket built by Bezos’ space company Blue Origin.

“You see the earth from space and it changes you. It changes your relationship with this planet, with humanity. It’s one Earth,” said Bezos in his post. “I want to go on this flight because it’s the thing I’ve wanted to do all my life. It’s an adventure. It’s a big deal for me.”

The Bezos brothers will be joined by the winning bidder of an online auction that will end on July 12, where the price for a ticket is currently sitting at $2.8 million. Lift-off will take the crew of the rocket to the Kármán line, which is 62 miles above sea level and should provide a once-in-a-lifetime view of Earth’s curvature. Something which video game developer Richard Garriott has plenty of experience with after he spent a few days in space back in 2008.

After the trip has completed, the crew capsule will detach from the booster and will land in the West Texas desert via the aid of parachutes. Bezos isn’t the only billionaire to aim for outer space, as Tesla’s Elon Musk and Virgin’s Richard Branson all have their own initiatives in place to offer space tourism to anyone with the deep cash reserves who can afford such an experience.

There’s no word yet on how Tim Curry has reacted to the news of capitalism finally escaping the gravitational pull of Terra Firma.