Skip to content
Homepage / View Comments (0) / I Am Fish Is Exactly What It Sounds Like, Coming This Year To Xbox And PC 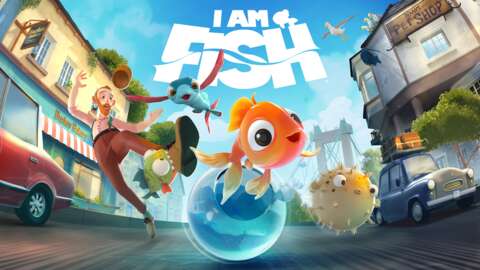 Bossa Studios has revealed its next simulator-type game, and this one lets you be a fish. After releasing Surgeon Simulator and I Am Bread, the British developer has now announced I Am Fish and confirmed that a free demo will be released on June 16.

In I Am Fish, you play as a fish that has been separated from its home in a pet shop and is now out in the world doing fun fish stuff. The idea is to get to the ocean Finding Nemo-style by flying and rolling in a fish tank. The game has four fish–a goldfish, pufferfish, flying fish, and piranha. Each has its own personalities and abilities.

The goldfish rolls around in its tank, while the pufferfish can puff itself up and roll through the landscape before getting back into the water. The piranha can grab stuff with its chompers. In the trailer, we see the piranha stuffing items down a toilet to clog it, which then floods the room so it can escape. The flying fish, well, you probably know what its unique ability is.

“Whilst sleepy Barnardshire is an idyllic coastal hideaway, it isn’t without its dangers! Our four fin-tastic friends will have to navigate threats such as crossing roads, traversing rooftops, dodging deep fat fryers, and avoiding hungry wildlife, making e-fish-ient use of jars, wheeled mop buckets, and more to reach the final goal–the deep, vast ocean!” reads a line from the game’s description.

I Am Fish is scheduled to release in Q3 2021 on Xbox and PC; no PlayStation edition has been announced. Curve Digital is publishing I Am Fish.