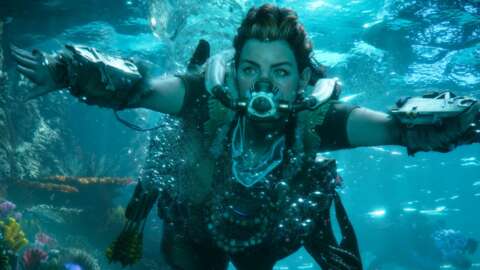 Last week’s State of Play event showed Horizon Forbidden West running on PlayStation 5, but those visuals won’t just be reserved for Sony’s latest console. PS4 owners will also be able to experience the next chapter in the Horizon saga, and according to developer Guerilla Games. a lot of time has been spent developing the game specifically for that last-gen device, while also ensuring that the PS5 version would receive more next-gen features in the graphical department.

“A lot of the development has taken place on the PlayStation 4, and a lot of play-testing is also done on PS4, so we are ensuring that owners of that console will have a great experience and that the game will look fantastic,” game director Mathijs de Jonge said in a new interview with Game Informer.

“For the PS5, we can go much further of course. Visually we can add a lot more detail graphically. The rendering technique for the underwater scenes is special on the PS5, it has extra details and extra systems. The lighting on Aloy on the PS5 has much more definition, we use a special cinematic lighting rig that is on the PS4 is only used in cutscenes because we have more processing power in those scenes.”

Other PS5 features that were discussed include full 3D audio from the console’s Tempest sound system and DualSense support, as well as several quality-of-life changes such as a completely overhauled skill tree and a new melee system with combos for Aloy. In a separate interview with French YouTuber Julien Chieze, Di Jonge and narrative director Benjamin McCaw also confirmed that Forbidden West will have a 60 FPS performance mode on the newer PlayStation console.

Guerrilla Games recently showed off more than 10 minutes of new gameplay footage from Forbidden West, and you can see a number of these new visual ideas and gameplay mechanics in action in that PS5 slice of footage.

Meanwhile, Sony Santa Monica’s God of War: Ragnarok has a more definite release date, as that sequel to the 2018 game will now be arriving in 2022.