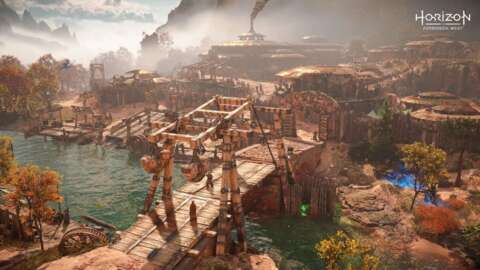 Horizon Forbidden West developer Guerrilla Games is continuing to drop more about the new game and its world, leading up to the game’s release in February 2022. A new blog post by Guerilla developers focuses this time on the game’s living world, including its cultures, settlements, and the technology that brings it all to life.

The post by Guerrilla’s community lead Bo de Vries quotes the game’s lead living world designer, Espen Sogn, about how his team brings Horizon’s world to life. “When you walk through the Forbidden West, everything should feel like it belongs there,” Sogn explains. “The Living World team at Guerrilla works on aspects of the game that make the world feel authentic and alive: the tribes, the settlements, and the people within them. There’s an intention behind everything we place within the world.”

While most of the post apocalyptic setting’s tribes were introduced by name in Horizon Zero Dawn, the sequel will properly introduce factions like the warlike Tenakth and the agrarian Utaru as Aloy explores their settlements and interacts with their people.

“Within their settlements, you’ll see the Tenakth working out, readying themselves for battle,” said Espen, discussing how the living world team adapts details given to them by the game’s writers. “They’re often younger because they need to be capable warriors. Their base is an ancient ruin, from which they’ve picked up certain Old World gestures that they may not fully understand–like using a military salute to say hello.”

The flavor of these distinct cultures is the result of collaboration between a number of different teams, comprising both artistic and technical aspects. Espen also details how the game’s crowd system works to create those realistic-feeling cultures by defining NPC animations and behaviors.

“When members of a tribe are in their settlement, their safe spaces, they can act like themselves,” Espen elaborated. “The Oseram are a social and historically patriarchal tribe, so their animations are more about shoulder punches and high fives. The Utaru, on the other hand, are laid back, so they will often sit down together and be a bit more touchy-feely. As the player moves around, these are potential subconscious hints that will help you visualize where in the world you are. All of this happens within the game’s narrative framework. You should be able to identify from a distance which tribe you’re looking at.”

These different cultures each have their own settlements scattered across the Forbidden West, which Aloy will be able to visit in the game. The first one Aloy will encounter is Chainscrape, an Oseram border outpost that is designed to immerse the player in the game and its setting. Other settlements around the world will act as safe havens as Aloy explores the open world, also offering opportunities to buy supplies, weapons, and outfits, and upgrade gear.

A previous Horizon blog post went into some detail about weapons and items in the sequel, and this one expands on the outfits that will be available to Aloy as well. Aloy will be able to take advantage of new outfits from the different tribes of the Forbidden West, while the sequel will also offer more opportunities to upgrade outfits beyond the first game’s modification items.

“Aloy can forge the machine parts she’s harvested into her weapons and outfits, upgrading them to be even stronger,” said senior designer Steven Lumpkin. “As you travel the Forbidden West, take note of machines that have visible horns, claws, tusks, or tails. While early upgrades may just need a bit of braided wire or sturdy hardplate, if you want extra mod slots, the strongest perks, or the biggest resistances… you’ll want to make sure you shoot off the Tremortusk’s parts before you take it down.”

Check out the full blog post for more detail on the game’s expanded world, and how it’s being brought to life. Horizon Forbidden West is due to release on February 18, 2022 for the PS4 and PS5.