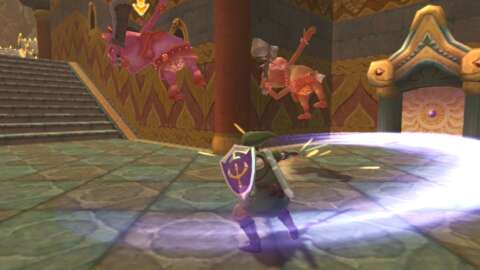 One of the biggest additions in The Legend of Zelda: Skyward Sword HD is a new control scheme that allows you to play the game with buttons instead of motion controls, and Nintendo has given us another brief look at this new control scheme in action.

The official Japanese Legend of Zelda Twitter account shared a new video showcasing Skyward Sword HD’s controls. The left side of the screen shows the different gestures you need to perform with the Joy-Cons to swing Link’s sword, fire his bow, and pull off other actions in the game, while the right side shows how to perform those same actions on a Switch Lite using the game’s new button controls.

Given that they need to accommodate actions that were originally designed around motions, the button controls differ a bit from previous Zelda games. To slash with Link’s sword, for instance, you need to move the right control stick in specific directions, and throwing a bomb is handled by pushing the right stick forward and releasing the ZR button. You can see the full clip in the tweet above.

The Legend of Zelda: Skyward Sword originally released on the Wii back in 2011. Although it wasn’t the first Zelda game to release for the console, it was the first designed specifically around the Wii Remote and Nunchuck, making extensive use of motion controls.

The Legend of Zelda: Skyward Sword HD launches for Nintendo Switch on July 16. Releasing alongside the game that day is a Zelda-themed set of Joy-Cons and a Zelda & Loftwing Amiibo figure. The latter is the only Amiibo that’s compatible with the game, and it allows you to fast travel between the surface world and the sky when scanned.