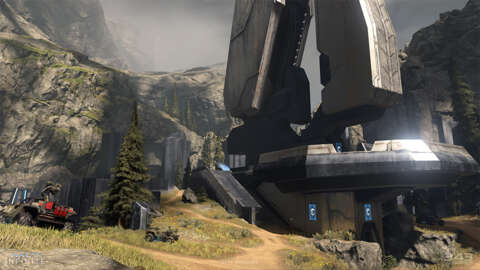 Halo Infinite’s Big Team Battle beta took place over the weekend, and it allowed players to embrace the chaos of Halo’s biggest, most frenetic multiplayer mode.

With the beta now wrapped up, we’re rounding up some of the best plays and moments we came across from the beta–and there were plenty to choose from. Despite only being a beta, players quickly learned the ropes and showed off some impressive skills.

Be warned that some clips shared here contain strong language.

In this next clip, Brendan Lowry shows off another creative and effective use of the Grappleshot. Lowry uses the Grappleshot to latch onto an escaping Warthog and then pound it with a Gravity Hammer. “Where do you think you’re going,” Lowry captioned the video.

And in what could have been among the world’s first Killionaire in Halo Infinite, Extremebreaker1 shows off some impressive flying skills in the Wasp to take down 10 enemies in a row.

In this clip from Kidskull, they show off their impressive driving skills in the Ghost as they get into a dicey situation before turning the tables and coming away with some kills.

YouTuber HiddenXperia found a nest of gophers in Halo Infinite and this caught the attention of teammates who stopped by to check it out. Except this was a bad idea in the end, because bunching up like that gave an enemy a chance to drop a couple of Dynamo grenades and get a Killtastrophe.

I found a secret Gopher nest in Halo Infinite BTB which amazed my entire team so much it caused someone on the enemy team to get a Killtastrophe (8 kills) with 2 Dynamo Grenades
worth pic.twitter.com/RTM4S9DLss

343’s own John Junyszek showed off some very impressive skills with the Grappleshot and the Skewer in this clip. Anyone who matched up with Junyszek was unlucky to do so, because Junyszek is clearly very good.

The Xbox Studio account showed off some impressive skills with the Grappleshot, vaulting through the air and showcasing how the equipment can be used to great effect.

And finally, 343’s own Brian Jarrard showed off how Pelicans that drop in to bring in new vehicles are, in fact, deadly. Always watch where you’re going…

Halo Infinite launches on December 8 for Xbox One, Xbox Series X|S, and PC. The multiplayer element is free and will be offered as a standalone game.