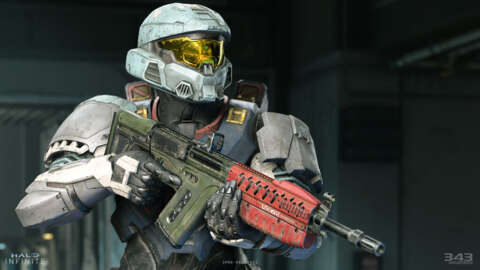 Halo Infinite’s multiplayer beta out now, and people are making all manner of discoveries about what’s new and different in the latest edition of Halo multiplayer.

One such discovery is that hits with the flag in Capture the Flag or strikes with the skull/ball in Oddball do not kill opponents with one hit as they did in some previous games. Some people are unhappy about this, and a developer from 343 Industries has now responded.

Developer 343karnivore on Reddit replied to the discussion, saying it’s not totally true that Flag and skull hits have always been one-hit kills in all previous Halo games.

“Of course, it’s annoying to come into something with a certain expectation, have it unmet, and then feel like you need to re-learn something ‘needlessly.’ BUT it’s more important that we put forward the best gameplay experience we can with the data and resources we have,” the developer said.

343karnivore added that internal development tests showed that one-hit kills with the flag or skull led to a gameplay imbalance. “The net result of [one-hit kill] for either item tends to increase snowball-size too much,” the developer said. The team with the objective-advantage has an easier time completing their goal and their opponents feel the task of rubber-banding the scenario back in their favor too difficult or too far and few between.”

The developer acknowledged that one-hit kills with the flag or skull in Halo games are fun for the objective-carrier, but “overall matches are less compelling or fun.”

Looking ahead, 343karnivore said Halo Infinite will be supported and updated for a long time to come, so it’s possible there will be changes in this department. “The intent is to cultivate the game for a long time, though, so please don’t take away from this, ‘It can’t or won’t ever change,'” they said. “Keep creating discussions like this one. Keep giving your feedback.”

While Halo Infinite’s gameplay is being generally well received, many people have criticized how XP and progression work in the shooter. Developer 343 says it is collecting all the feedback and might make changes in the future.