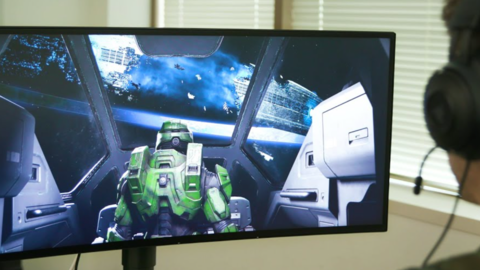 Halo Infinite developer 343 Industries has released a PC overview trailer for the upcoming sci-fi shooter. The video features insights from the Sandbox and PC-specific teams working on the game to speak about the PC edition. “Buckle up,” 343 said.

“We’re not just shipping a port of the console game on day one. We really are building it from the ground up to be a great game for PC players who love to customize the experience the way they want to,” 343’s Joseph Staten says.

The full video touches on a huge range of other elements of the PC edition, including ultra-wide support, frame rate settings, and a variety of other PC options like triple key bindings and many different control configurations. The video also touches on what 343 is doing to keep the battlefield clean through anti-cheat, while the developers also talk about cross-play and cross-progression with the console edition of the game. Also in the video, the developers confirm there will be individual unique ranked playlists for keyboard/mouse, controller, and cross-play, so players can see how they stack up against people using similar control setups. Here’s the video:

Additionally, 343 has announced a partnership with AMD for a new Radeo RX 6900 XT limited edition GPU themed around Halo Infinite. Check out the video below to learn more about that, while many more details on Halo Infinite for PC are available on the Halo Waypoint blog.

According to Microsoft, Halo Infinite was “built from the ground up for PC.” It will have “advanced graphics settings” and support for ultrawide and super ultrawide monitors, along with triple-key binds and features like dynamic scaling and variable frame rates.

For more, check out the full list of PC system requirements for Halo Infinite below. The game launches on December 8 for PC, as well as Xbox One and Xbox Series X|S.

(According to Steam’s product page for the game)