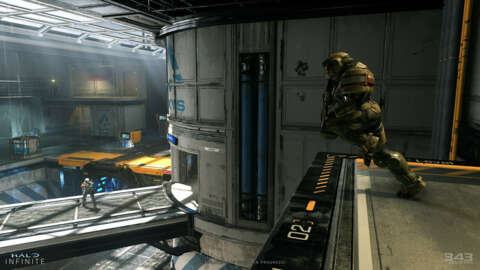 343 Industries will reveal Halo Infinite’s competitive settings today, October 14, as part of a new video and a detailed blog post that runs through the specifics. This is a big deal because 343 has yet to discuss anything about ranked/competitive/eSports options for Halo Infinite.

The video premiere is available now on YouTube, and it’s set to go live at 10 AM PT / 1 PM ET.

The thumbnail for the competitive settings reveal video shows a Battle Rifle, which some are taking to suggest that BR starts will be on by default for competitive, but this is unconfirmed.

Halo Infinite has a storied legacy for esports, so it’ll be interesting to see how the new game shakes things up. The first in-person Halo Infinite tournament takes place in Raleigh, North Carolina this December, and tickets sold out almost immediately for the $250,000 tournament.

After a lengthy delay, Halo Infinite launches on December 8 for PC, Xbox One, and Xbox Series X.