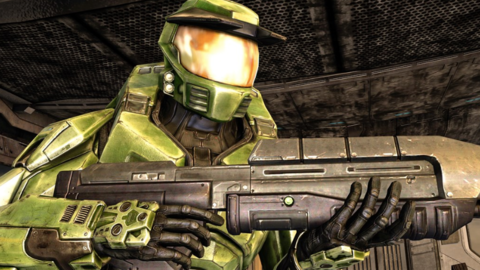 Bungie apparently had a lot more planned for Halo: Combat Evolved than what was eventually shipped out with Xbox consoles back in November of 2001. The franchise’s co-creator, Marcus Lehto, posted a video on Twitter showing off some of the game’s unreleased weapons and more.

According to the tweet, the weapons would have been used solely by the Covenant and are only present in a PC build of Halo: Combat Evolved from 2000. If they made it into the game, the Covenant would have had access to a concussion gun, excavator, particle beam rifle, and even a microwave gun. Other Covenant-exclusive weapons are still present in the game, including the Energy Sword and Fuel Rod Cannon.

In action, these unreleased weapons seem pretty impressive, with the microwave gun glowing a bright yellow, and the concussion gun firing off like a shotgun. However, the guns were never finished, with some missing sound effects entirely or using placeholders.

I found these Covenant weapon prototypes in my old 2000 Halo PC build that you might like.
c concussion gun
c excavator
c particle beam rifle
c microwave gun
I like the meter cooldown on the concussion gun.
The microwave gun would have been hilarious.#Halo pic.twitter.com/qGQO0XFn3R

Along with cut weapons, a couple of vehicles that never made it into Halo: Combat Evolved are shown in the video, including a stealth tank. The tank, which appears early in the video, is squat and seemingly painted camouflage. According to Lehto, it had to be cut “before we started dev for Xbox.” Before moving to Xbox, Halo: Combat Evolved was going to be an RTS, then a third-person shooter for PC and Mac.

These weapons from the early days of Halo are much more sci-fi than the guns coming in Halo Infinite, which stay pretty grounded in reality. In the upcoming game, players can look forward to riot shotguns and assault rifles, with the oddity here or there. The Mangler for instance is one new weapon being added in Halo Infinite that fires kinetic projectiles instead of measly bullets. If you want to get your hands on Halo Infinite’s weaponry early, be sure to sign up for Halo Insider, which grants eligibility for a spot in the game’s beta.

Halo CE’s Magnum Isn’t In Infinite, But These Videos Show It Some Love