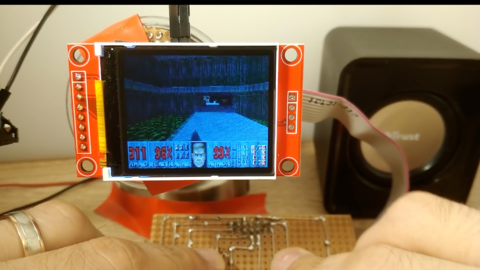 A hacker collective has figured out how to run the 1993 shooter Doom using the components of an Ikea lightbulb–because why not. If it has a computer inside, it can probably run Doom, and this is the latest demonstration of that.

Next-hack published a lengthy blog post detailing how the group disassembled the approximately $20 TRÅDFRI LED wireless lightbulb to extract its RF module and combine that with other components–a bit more flash memory, a cheap160×128 SPI display, etcetera–to build the setup.

There were some restrictions the group put on themselves, however, namely that the “microcontroller [must have] reasonably limited computing power and/or memory, with respect to vanilla Doom’s minimum requirements.” On top of limiting computing power, next-hack required themselves to play Doom using the embedded microcontroller, not some replacement.

The result is impressive, as Doom runs pretty smooth using the lightbulb’s components. You can check out the gameplay video for yourself below.

It’s worth noting that the next-heck team said they were inspired by false reports last year of a self-described “hardware / software necromancer” named Foone who got Doom running on a pregnancy test. However, it turned out that it wasn’t live gameplay but instead a video playback from PC.

In other Doom news, developer id Software confirmed that Doom Eternal will get a free next-gen upgrade for PC, PlayStation 5, Xbox Series X|S on June 29. It’ll feature improved visuals and a performance mode for all platforms.