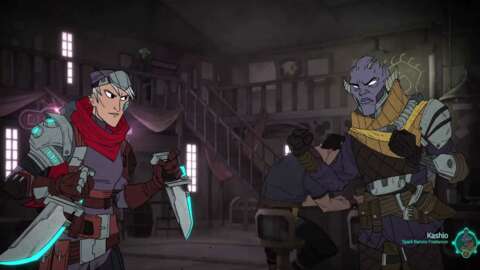 Griftlands by Don’t Starve developer Klei Entertainment will be released on June 1. Initially announced at the 2017 E3 event and released in an alpha version in 2019, the full Griftlands game will first launch through Steam, Klei has announced. Following shortly after, on June 4, you’ll also be able to purchase the game on Nintendo Switch, Xbox One, and PS4.

Griftlands is a narrative RPG primarily driven through card mechanics. According to a PS Blog post by Klei Entertainment’s designer Kevin Forbes, Griftlands will offer both “multiple branching stories” and a “deck-building card game with deep interlocking systems driving both combat and negotiation.”

Forbes emphasizes Griftlands’ replayability and strong narrative. NPCs who were your ally in one playthrough may be an enemy in the next, and scenarios like boss fights will be shuffled randomly.

The game will first release in Chinese (Simplified and Traditional) and English. Official translations in other languages will get added in the weeks following launch.

Griftlands’ alpha edition included only one playable character, Sal, while the full soon-to-be-released version features a total of three playable characters and much more content, cards, bosses, and NPCs. The other two characters players can take control of, other than Sal the bounty hunter, are Rook–“a spy with a mysterious contract”– and Smith–a guy who is just trying to collect his inheritance.

Klei Entertainment made Don’t Starve, a survival game released in 2013 that received positive reviews. In GameSpot’s Don’t Starve review, critic Nathan Meunier rated it a 7/10. He praised the blend of survival, crafting, and exploration elements, while critiquing the game’s “unflinchingly brutal difficulty” and “lacking the rewards that would balance out the repetition.”