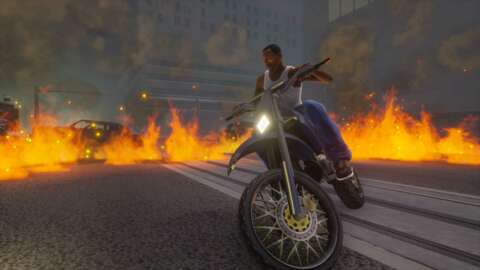 Soon, players will be able to walk through the streets of San Andreas literally in CJ’s shoes. Announced during Facebook’s metaverse-focused Connect event, it was revealed that Grand Theft Auto: San Andreas is coming to VR via the social media giant’s Oculus Quest 2 headset.

While GTA: San Andreas’ release on the Quest 2 marks the franchise’s first journey onto the platform, VR isn’t anything new for Rockstar. The developer re-released L.A. Noire as a VR title for PlayStation VR, the HTC Vive, and Oculus Rift in 2016.

It’s not clear when GTA: San Andreas’ VR version will release on the Oculus Quest 2. According to a page on Oculus’ site, the title has been “many years in the making.”