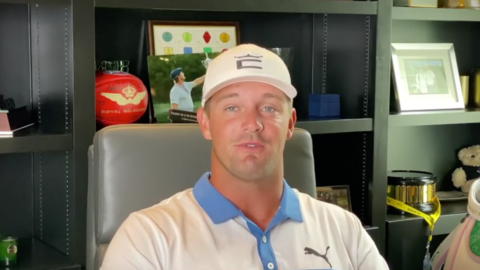 The Warner Bros. golf game Golf Clash is partnering with one of the most talked-about players in golf, Bryson DeChambeau, for a special promotion that will bring new content to the mobile title.

Now through June 21, players can take part in a new event called Bryson’s Power Play Challenge, which is a closest-to-the-pin competition themed around distance. As golf fans know, DeChambeau is currently changing the game of golf with his focus on power and speed, fueled by his intake of many, many protein shakes.

You can win the Bryson Ball in Golf Clash by hitting a hole-in-one in the game’s standard mode or by winning a chest in hard mode.

The Bryson Ball is, as you’d expect, all about power, while it features his autograph and silhouette logo, too. “As the longest driver on the PGA Tour, DeChambeau’s bespoke golf ball features a combination of powerful attributes to match his physical prowess on the course and prominently displays his autograph and silhouette logo, complete with his signature golf cap,” reads a line from WB’s press release.

The ball will be available to buy in Golf Clash June 15-18, but once you have it, you can use it forever.

Outside of this, there is also a Bryson DeChambeau 9-Hole Cup in-game event that kicks off today and runs June 17-20. It’s a three-day tournament with two qualifying rounds, and then one final round. A practice mode is available right now.

“I’m a big fan of video games so it’s awesome to have my own content in Golf Clash,” DeChambeau said. “Whether I’m playing at home or on the road, Golf Clash really brings out my inner scientist, and I love how you can incorporate so many different strategies with a huge variety of balls and clubs. I’m excited to see fans try out my Power Play Challenge on the virtual course this week!”

DeChambeau is one of the young greats on the PGA Tour. He won the 2020 US Open and is currently ranked No. 5 overall in the World Golf Rankings. Beyond that, he’s known for bulking up substantially in recent years to help his driving distance.

It’s free on iOS and Android.