Skip to content
Homepage / Check it out / Get Ready To Wage War In The Streets Of Tarkov, A New Area For MMO Escape From Tarkov 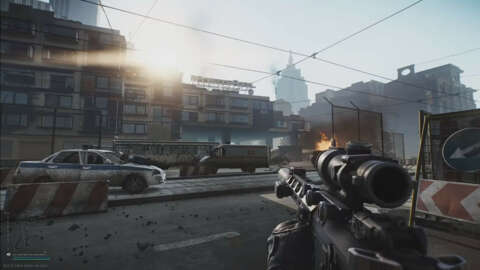 Escape from Tarkov has continued growing as players flock to it for its intense mix of survival, unrelenting first-person action, and massive multiplayer lobbies. Developer BattleState Games is continuing to support its game, too, with the studio announcing a whole new area, Streets of Tarkov, that is currently in development.

The content update, which is set to launch with Update 0.13 in the future, will condense the fighting that Tarkov has become popular for into the streets of Concordia. As you navigate narrow corridors, breach into dangerous rooms, and engage in firefights in abandoned parking lots, the stakes for Escape from Tarkov’s gameplay haven’t looked higher.

The gameplay teaser above looks great too, with loads of detail packed into the new area that really gives it a strong sense of place in the game’s growing lore. The city of Concordia, once a bustling business residential block, features the remnants of a society you and everyone else in Escape from Tarkov have left behind. The MMO has consistently delivered a great, evolving story, and Concordia looks like it will have many more secrets to uncover.

Escape from Tarkov is available on PC now, but BattleState Games have yet to announce a date for Update 0.13.