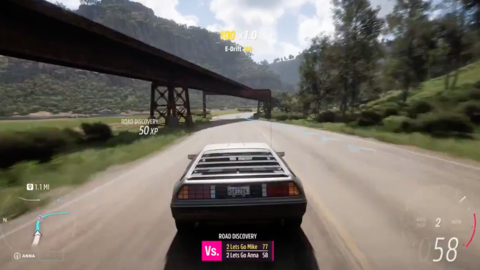 Forza Horizon 5 will feature the DeLorean DMC-12, the car made famous in the movie Back to the Future, the developers have announced.

The car is coming to Forza Horizon 5 during the first week of the Festival Playlist. The developers also shared a gameplay clip of the DeLorean in action, but it never reaches 88 mph, so we don’t know yet if it will take players back in time.

The DeLorean DMC-12, known for its unique gull-wing doors, was produced on a very limited basis in the ’80s but remains popular thanks in part to Back to the Future.

It’s not the only unusual car featured on Forza Horizon 5’s car list, as Halo’s Warthog is in the game, too. It’s not a real car per se, though Microsoft did commission a company to build one.

Forza Horizon 5 launches on November 5 for Xbox One, Xbox Series X|S, and PC, and it’s included with Xbox Game Pass. The game is set in Mexico, and it features a massive open world with 11 distinct biomes and new weather effects like sandstorms.

Microsoft Reminds Us How Forza Is Really Pronounced