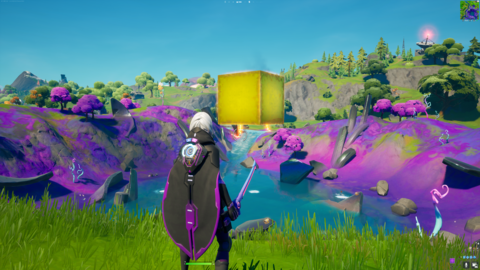 Fortnite Season 8 is all about the mysterious sentient cubes scattered around the island, and one of them is now acting very strangely–which is really saying something given that, well, it’s already a sentient cube. The golden cube, which some players believe is the “queen” cube, has been, like other cubes on the island, slowly rolling around the island a few times per day. But now it’s floating above The Aftermath, and some players think they know why.

Head into any match right now and you’ll see the golden cube zapping the waters in the crater where the Zero Point once floated. Dataminers believe it’s because the cube will soon form a brand-new place of interest (POI), and they’re calling it Cubetown.

The reason for that name is obvious once you see the leaked video from dataminer FortTory. In place of the crater may soon be found a town made entirely out of cubes. The golden cube has already been seen zapping the other large cubes around the island and creating smaller cubes, and now it seems its biggest renovation project yet is underway at the heart of the island.

Why? Well, no one really knows. One prominent community member has a bee hive theory and believes the queen cube is essentially the queen bee, but even as the theory seems to fit aesthetically, it doesn’t really examine the “why” of the matter. Epic loves a mystery, so don’t expect concrete answers anytime soon.

As for when we can expect this change to occur, an 18.21 hotfix patch is scheduled to arrive next Tuesday, October 19, so that seems like a possibility. Alongside this new Cubetown POI should also come the Fortnitemares 2021 challenges, which will bring with them new mechanics for a limited time and free cosmetics earned only through play.

It’s been another busy week in the Fortnite world. Don’t miss the reveal of an Among Us collaboration, the 18.20 patch notes, and the new and improved Item Shop refund policy.