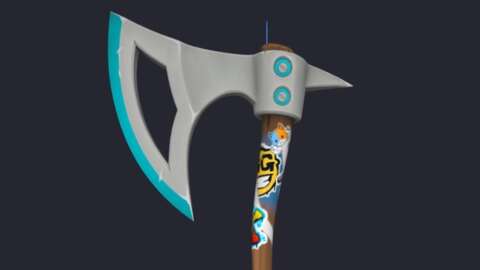 Fortnite Chapter 2 is ending, and in Fortnite Chapter 3, we might see the debut of a new throwing axe weapon. The news comes via a leak by the game’s foremost leaker, @Hypex, who showed off images apparently straight from the game’s files that depict the throwing axe as it currently appears. Whether it comes to the game or ends up not making it in remains to be seen, though often it’s the case that leakers share information on things they know to be forthcoming, but present them only as potential future content so as not to burn sources or totally spoil Epic’s planned reveals.

The throwing axe features an array of Fortnite stickers on its wooden grip, including one depicting Kit, the feline offspring of fan-favorite character Meowscles. It has a lengthy and sharp head with blue accents on the blade and bolts, as well as more character charms hanging off the bottom of the handle. If it comes to Fortnite, it’s likely it will be carried in your five-slot inventory like the throwables already in the game, such as grenades and firefly jars (essentially Molotov cocktails).

The introduction of such a weapon would add to Fortnite’s already-impressive repertoire of gadgets and its ever-changing meta. This past season has done an especially good job of reminding players of just how much content there is in the Fortnite vault, as players have voted to unvault classic weapons roughly twice per month as of late. It’s likely that the throwing axe would come and go from the vault on a season-by-season basis like many weapons, though some throwables do persist season after season, such as those aforementioned mainstays.

We don’t yet know whether the throwing axe would include rarities with increasing attributes in areas such as damage and item carry limit, but again, looking to other throwables may be instructive in this regard. If so, we expect the throwing axe to come at a flat rarity without any available improvements. Then again, with so much we don’t yet know about Fortnite Chapter 3, we can merely speculate.

What we know for sure is Chapter 2 is coming to The End, and soon we’ll all be living in a new Fortnite reality–perhaps with throwing axes in hand. Start practicing your Kratos voice.

All New Weapons And Items In Fortnite Chapter 3

Fortnite Victory Crowns Explained: Why Some Players Names Are In Gold