Skip to content
Homepage / Check it out / Fortnite Season 7 Teasers Include Superman, Rick And Morty, And More 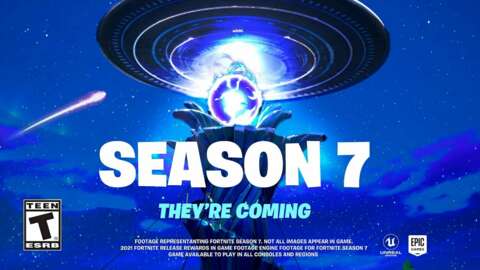 Fortnite Season 7 is merely hours away, and Epic Games is teasing what players can expect to find in the latest season. From Rick and Morty, to a missing-in-action Jonesy, to even an apparent Superman tease, Epic’s next season of Fortnite looks to be just as massive as ever, with aliens descending on the island to cause chaos and alter the landscape of the popular game once more.

Epic has been slow-rolling the release of brief and cryptic teasers for a few days. The first one appeared over the weekend and does not immediately point to any known characters from outside the Fortnite fiction, though it does suggest Agent Jones, the Troy Baker-voiced main character of the game’s expansive lore, is now missing in action. His face appears on the side of a milk carton with the words “MISSING” just like the old days.

The text description with the teaser seems to come from the aliens themselves, which have recently been abducting players at the end of Season 6:

“Catalog Entry #437-887. The creatures of the Island seem to use this strange, flimsy holding device to consume their… bone modification liquid? Fascinating indeed.”

Since then, two more similar teasers have arrived, both pointing to licensed crossovers with some massive properties, which lately has been the focus of Fortnite’s Item Shop and Battle Passes.

The first seems to suggest DC’s foremost superhero, Superman, will be making his way to Apollo. Along a video featuring objects like a new sci-fi weapon and a guitar (likely unrelated Bling Bling), a pair of glasses comes with a jokey caption. “When placed onto the face this strange plastic device seemed to make us appear as unrecognizable.”

It would make a lot of sense for Superman to arrive in Fortnite. The past few months have been especially DC-heavy thanks in part to the ongoing Batman tie-in comic. He would join others such as the Teen Titans Beast Boy and Raven, Harley Quinn, and even Green Arrow, who arrived by way of the Fortnite Crew subscription in January.

Because one huge collaboration is never enough for Fortnite, it seems Rick and Morty will be coming to the game in some fashion. The third and final teaser for Fortnite Season 7 arrived today and in no uncertain terms includes the existential dread-filled butter robot.

As the season looks primed to focus largely on aliens and adjacent science fiction concepts, a Rick and Morty collaboration is, in hindsight, one we should’ve seen coming when we wrote about possible tie-ins we want to see in the game. We’re still holding out for Agents Scully and Mulder though.

It’s the final day of Fortnite Season 6. Be sure to close out your last few Week 12 challenges. Tomorrow, we’ll be bringing you a full rundown of Fortnite Season 7, including the map changes, a Battle Pass overview, and guides on any other new elements Epic adds to the game for its season of invasion.