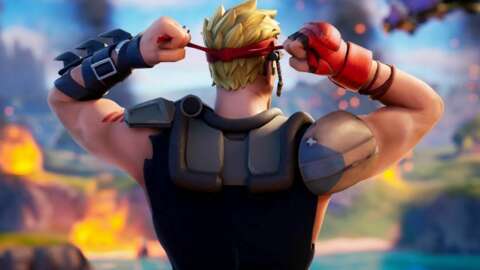 While Fortnite challenges normally launch weekly on Thursdays, Epic is known to add other challenges at other intervals. It seems as though newly leaked Foreshadowing Quests, as they’ve been described by dataminers, are on their way separate from the weekly challenges. More excitingly, they may be hinting at the theme for Fortnite Season 7.

While these quests may not hint at the Season 7 theme, they certainly have a consistent theme of their own, that being conspiracies and the supernatural. Furthering this theory is the associated NPC dialogue that players will read as they embark on these challenges. Things like Farmer Steel decrying, “Pranksters, aliens, whatever you are. If you come for my corn, there’s gonna be trouble” seems to suggest these quests, and perhaps Season 7, will dabble with the unknown. Naturally, Fortnite’s resident conspiracy theorist Bunker Jonesy is involved too, saying to players at one point, “it’s almost like someone doesn’t want us looking at the stars.”

So the closer we get to the end of this season without these Foreshadowing Quests to be released, almost basically confirms that these will be Quests Foreshadowing for the new season. pic.twitter.com/xdy5qLQ1ye

Meanwhile, The Foundation, whom fans have all but confirmed is secretly The Rock, is still stuck in the Zero Point, so Epic will likely need to resolve this storyline somehow, perhaps with aliens. The Fortnite Season 7 theme has been a topic of conversation for weeks already, but that’s a subject that tends to heat up the closer Fortnite gets to its seasonal changeovers, like that we are about to experience on June 8. Players are also still waiting to find out if there will be a season-ending event, though at this point they’re customary and it would be a surprise if there weren’t an event.

It’s possible these Foreshadowing Quests will arrive tomorrow, May 25, alongside update 16.50, which dataminers also say is expected to come this week. If so, we’ll share those patch notes once they’re available.

In other Fortnite news, the NBA Team Battles event is over, but it represented a rare dud for Epic’s massive platform.