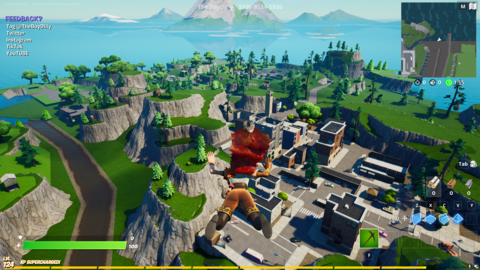 While recent seasons of Fortnite have received glowing praise from the game’s massive community, some players still long for the original Fortnite map in Chapter 1. One player who clearly felt that way went to such great lengths that he’s recreated the entire Chapter 1 Season 2 map within Fortnite Creative mode, including accurate locations, loot drops, and even its own Battle Star system.

Calling the original creation Athena Royale–Athena is the name of the Chapter 1 map–content creator Atomic TheBoyDilly has painstakingly rebuilt the OG Fortnite map, and in the process, nearly perfected the replica according to players. While some players have pointed out some minor differences, Atomic TheBoyDilly has been responsive to suggestions and seems intent to keep working on the map to improve it further.

The map is limited to just 50 players and only playable in solo mode, and Atomic TheBoyDilly is still working out some of the flaws he perceives to be present, like a lack of floor loot. Nonetheless, reviews from fans have been very positive so far. You can get a good look at the map in this fan video featuring a good old-fashioned rocket ride.

If you want to play Athena Royale for yourself, it’s completely free within Fortnite Creative mode. You’ll just need the Athena Royale creative code: 3206-9524-5936. From there, you can add it to your favorite creative maps so it’s always featured prominently in your UI. If you didn’t play Fortnite way back then, it’s also a good opportunity to see what you missed.

If you’d rather stick to the official Fortnite goings-on, there’s still a lot to see this week thanks to Wrath of the Cube Queen, this year’s Fortnitemares Halloween celebration.

Fortnite: The 10 Most Important Characters In The Lore