Skip to content
Homepage / Check it out / Fortnite 17.10 Patch Notes Tease A Way Onto The Alien Mothership 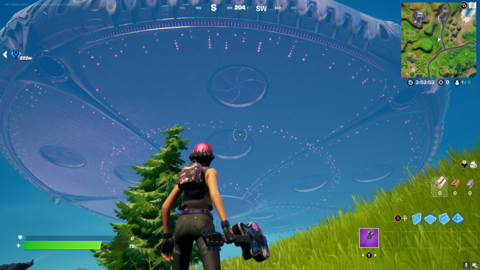 Fortnite version 17.10 is on the way, and while the patch notes are short, they include a major gameplay shift. Players who have jumped into Fortnite Season 7 already know that an alien invasion is currently underway, with the Imagined Order (IO) leading a supposed resistance. While the alien Mothership still looms large, casting a shadow over the entire island, Epic is teasing a new way for players to get on board the Mothership starting this week.

Fortnite patch 17.10, as its name suggests, is the first major gameplay patch since the launch of the new season. According to the Fortnite Trello board, should also bring NPC #2 to the island, after the season launched with a bug that prevented the character from appearing.

Meanwhile, on Twitter, the Fortnite Status account’s version of the 17.10 update includes just that one bullet point–“A new surprise descends. A way inside the Mothership?”– but it confirms something Epic has been teasing since earlier this morning. Starting with tomorrow’s update, the mothership will become its own location in rounds of Battle Royale, taking players off-land and high above even Mount Kay, the summit of Apollo.

How this will work is anyone’s guess for now. Even dataminers seem stumped about this, though it should be something we’ll better understand once downtime for the game occurs tomorrow at 12:30 AM PT / 3:30 AM ET. It’s usually within that downtime window when the lively Fortnite datamining community picks apart forthcoming changes.

The game’s official accounts were first to tease the incoming gameplay change earlier today, posting as the in-universe characters, the Hot Saucers.

Heya, Hot Saucers here to break down the ongoing invasion!

Found a secret IO File on alien tech. Apparently there’s a way inside the Mothership! 🤯🤯

What could they want? Why are they here? #HotSaucersLeaks

Incidentally, the tweet led to the Fortnite community opining on the game’s already hyperactive leakers, like Shiina, Hypex, and iFireMonkey, who each joked about becoming obsolete in a post-Hot Saucers world. “Yall taking my spot????” joked Hypex in a reply to the initial “leak” from Epic. “Pls don’t steal my job and next time just send this text to me in DMs, I’ll post without giving credits,” added Shiina.

Fortnite patch 17.10 is expected to be fully online within a few hours of the downtime beginning, and should bring with it our first sneak peek of the upcoming Week 3 challenges. In the meantime, finish off the Week 2 challenges and Week 2 Alien Aritfacts here.