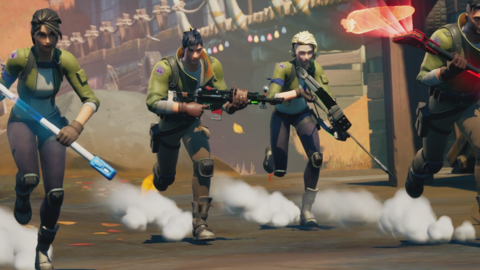 Fortnite update 16.50 launches tomorrow, May 25, and it’s expected to be the final update of the season. In its usually vague way, Epic has teased what’s in store with the Fortnite 16.50 patch notes.

At the forefront of the patch is the return of a mysterious “fan favorite” item, which Epic says will be unvaulted. According to dataminers, the item is likely to be the Dual Pistols, to coincide with this week’s leaked Legendary Quest which asks players to deal damage with the Dual Pistols.

This week’s legendary quest is “Deal damage with dual pistols (1500->7500)” so its most likely what they will unvault tomorrow!

The short patch notes also allude to players in Creative mode gaining access to bigger area maps to play around with, which might make creating NBA Creative modes bigger and better this week. Patch 16.50 will also lay the ground work for the next Wild Weeks theme, which seems to focus on Gold Bars. It’s likely the theme this week will give players more Gold Bars, either in chests and floor loot, or for completing NPC challenges.

You can find the full patch notes below. Downtime for the update is scheduled to begin on May 25 at 1 AM PT / 4 AM ET, and usually the game is back online within two hours or so.

The patch notes make no mention of the Foreshadowing Quests, which leaked earlier and indicate something is stirring for Season 7. Dataminers have yet to determine when these apparently alien-themed challenges will go live, but have stated they will come before the end of the season, thus hinting that Fortnite Season 7 may have an alien theme.