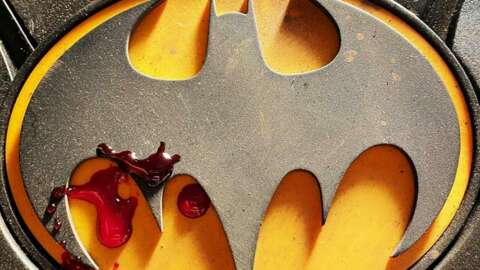 DC’s upcoming slate of comic book movies won’t be short on caped crusaders, as director Andy Muschietti has begun teasing the return of a very familiar Batman costume for the solo Flash movie that stars Ezra Miller as the scarlet speedster. With production underway on the film, Muschietti posted a photo on Instagram of a batsuit that looks like it could do with some cleaning.

The image below may be cropped, but the logo and chest armor is clearly based on Keaton’s costume from 1992’s Batman Returns, which swapped the more organic and textured batsuit from the 1989 film for something which looked like it was manufactured in a factory. The costume also had an art deco influence and was specifically designed to look sharper and a lot slicker.

Interestingly, the neckline also appears to have undergone a few modern changes, as up until 2005’s Batman Begins, the cowls that Keaton, Val Kilmer, and George Clooney wore were notorious for having zero range of motion. Keaton’s dramatic full-body turn for scenes where he had to look left or right eventually became known amongst fans as the “Keaton Turn.”

In other movie costume news, Shazam’s sequel has begun teasing an updated look for Zachary Levi’s return as the big red cheese. If you’re wanting to own a piece of bat-history and you have around $18,000 that’s gathering dust, you can even bid on a screen-used Batman Returns costume in the next Prop Store auction, although it has seen better days judging by how fragile it currently looks.