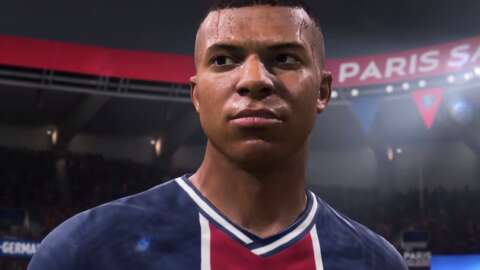 FIFA 22 is set to be revealed this Sunday, July 11, at 8:30 AM PT / 11:30 AM ET, ahead of the final of the UEFA Euro 2020 competition. A countdown to the trailer has appeared on YouTube, offering a first look at the annual sports title from EA.

Ahead of the trailer’s release, EA has revealed that Kylian Mbappe, striker for French club Paris Saint-Germain and French international star, will be the cover athlete for this year’s sequel. He’s front and center on the trailer’s thumbnail, with a striking likeness that has become common for the series and improves year-on-year. Mbappe was the cover star for FIFA 21, too.

FIFA 21 was another great entry into the long-running series, shaking up attacking play that offered dynamic plays going forward while also giving you more ball control with Agile Dribbling. The game’s Career mode still missed in spots, but the addition of a mode that harkened back to FIFA Street was welcomed.

GameSpot’s 8/10 FIFA 21 review goes on to explain that last year’s game was still full of great content that fans will likely still be enjoying today, with critic Richard Wakeling writing, “This is a substantial package that’s propped up by exciting gameplay that puts the onus squarely on attacking football. There are moments of frustration on defense when the balance doesn’t feel quite right, but then you’ll go down the other end and score a Puskás Award contender that makes you forget why you were mad in the first place.”