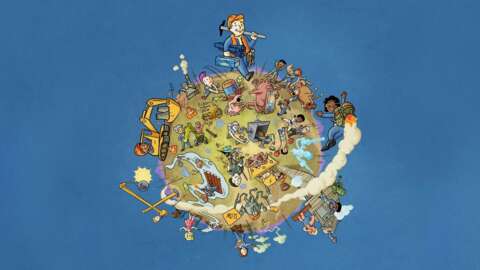 Fallout Worlds, the latest update for Fallout 76 that adds both public and custom worlds which will put all new spins on the game, is live now on all platforms.

Only one public world will be available for players to join at a time, with Bethesda planning to rotate public worlds once per month. One such example the game’s upcoming public worlds will be Happy Builder, which features reduced C.A.M.P. placement and building restrictions along with disabled PvP. Another, High Risk, won’t allow fast travel and will feature always-on PvP, in addition to having players drop additional loot on death.

If public worlds aren’t exciting enough, players can also create their own custom worlds as part of the Fallout Worlds update, though only players with an active Fallout 1st membership will be able to do so. Players creating a custom world have a variety of modifiers to choose from, ranging from infinitely spawning enemies, infinite ammo, and disabling the need for electricity.

The update also brings with it a new season of content to unlock. Bethesda says it is currently investigating an issue revolving around players using the game’s Atoms premium currency to purchase season ranks being unable to claim their rewards. In the meantime, the ability to rank up using Atoms in season six has been temporarily disabled. You can read the full patch notes for the update below.

With this update for Fallout 76, we’re introducing Fallout Worlds, which offers players the ability to experience the game in unique new ways with two new game modes: Public Worlds and Custom Worlds.

If you would like to learn additional details about Fallout Worlds, you can head here to read our article on Bethesda.net or read through our FAQ on the Fallout 1st website.

Our latest expansion for Daily Ops brings a new weekend event that amps up the challenge, but offers increased rewards. Read on for a brief overview of everything we’re adding to Daily Ops, including Double Mutation Weekend events!

With the arrival of today’s update, we have removed the Nuclear Winter game mode from Fallout 76. Alongside this change, we’re granting rewards to all players who had completed at least one Nuclear Winter match, and making many of the mode’s progression rewards available in Adventure Mode.

To learn more about our reasoning behind this change, you can read through this article on Fallout.com, or head here for more details about how rewards are being distributed.