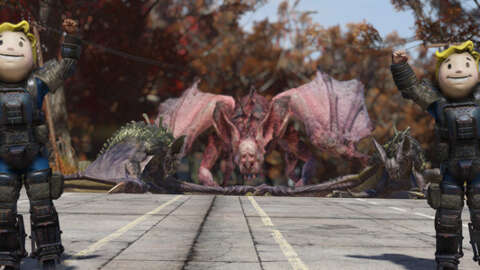 Xbox and Bethesda have announced that Fallout 76 will be completely free on Xbox and PC for the entire E3 week. Get out your acoustic guitar and call John Denver, it’s time to take the country roads home to West Virginia.

Live now through June 16, players can download the full Fallout 76 game on PlayStation 4, Xbox One, and PC free of charge. The game will also be heavily discounted all week long for those who choose to join permanently, with progress from the free trial carrying over to the full game after purchase.

The free week of Fallout 76 features double XP throughout the entire trial and includes a chance to test the game’s Scrapbox and Survival Tent memberships through a special in-game item. In order to access the pass trial, the official blog post for the announcements tells players to “head to the Atomic Shop to claim the free Fallout 1st Limited Preview ‘item,’ then unlock the Scrapbox from the Shop’s Fallout 1st page, and head in-game to try out both features.”

Players who decide to visit West Virginia for the first time through this trial can reference a handy Fallout 76 Newcomer’s Guide on Fallout.com, which offers early mission walkthroughs and general tips for the wasteland’s newest citizens.

Fallout 76 is a first-person shooter MMORPG set in West Virginia during the post-nuclear apocalypse. The game originally launched in October 2018, and was recently updated via the Locked and Loaded update in late April 2021.