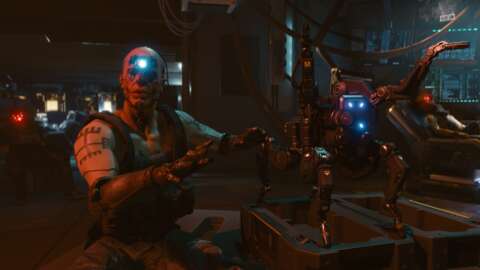 If you can’t get your hands on a PS5 or Xbox Series X to play Cyberpunk 2077, now you have the option of just buying a car instead. At a demo event for Tesla’s new Model S Plaid (named for the speed that comes after “Ludicrous” in the Mel Brooks classic Spaceballs), the car was briefly shown running CD Projekt Red’s latest title.

The Tesla Model S Plaid is able to run games with “PlayStation 5 level performance,” according to Tesla CEO Elon Musk. “There’s never been a car that has state of the art computing technology, state of the art infotainment where this is literally at the level of a PlayStation 5.”

Powering the electric car’s “infotainment” systems is AMD. The hardware manufacturer’s compute unit for the car includes an AMD Ryzen processor with integrated graphics along with an AMD RDNA 2 GPU. Altogether, this system gives the vehicle nearly 10 teraflops of power for gaming. If you remember, teraflops were a point of contention prior to the launch of new-gen consoles, with the Xbox Series X coming out with 12.1 teraflops and the PS5 launching with 10.3.

While we don’t know what settings Cyberpunk 2077 is running at, Musk said that the Tesla Model S Plaid can play games at a “high frame rate, it will do 60fps with state of the art games.”

This appears to be the payoff of Tesla’s game engineer hiring spree last year. While Tesla drivers can already download games from the Tesla Arcade, the company seemed to expand last year into developing its own gaming platform in the car. Judging from the performance of Cyberpunk 2077 in the Model S Plaid, Tesla accomplished that goal.