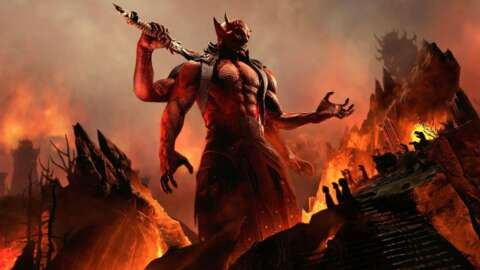 The gates of oblivion are open once more, as shown in the latest cinematic for The Elder Scrolls Online, released to celebrate the arrival of the game’s latest expansion, Blackwood.

Oblivion portals will be appearing throughout Tamriel in the form of public events, and as depicted in the trailer, it will be up to brave adventurers to “close shut the jaws of Oblivion” and foil the plot of the daedric prince Mehrunes Dagon.

Players will remember that Oblivion portals and the demons within them played a large role in the storyline of 2006’s The Elder Scrolls IV: Oblivion. Elder Scrolls Online’s Blackwood expansion, which takes place 800 years prior to the events of The Elder Scrolls IV, tasks players with uncovering Dagon’s schemes and unraveling a conspiracy involving the Longhouse Emperors, along the way traveling to areas like the Imperial city of Leyawiin.

ESO’s latest update also adds a major new system to the game in the form of companions. These NPCs can accompany players on their adventures, and can be customized with equipment and unique skills as they level up. Through engaging with their companion in dialogue and other actions, players can unlock unique rewards and quests.

Blackwood is the latest chapter in what Bethesda is calling its year-long “Gates of Oblivion” saga, with two more major DLC releases related to the saga slated to release later this year. The game’s Xbox Series X and PlayStation 5 next-gen update, which will improve load times, draw distance, and add a 60fps performance mode, is coming June 15.