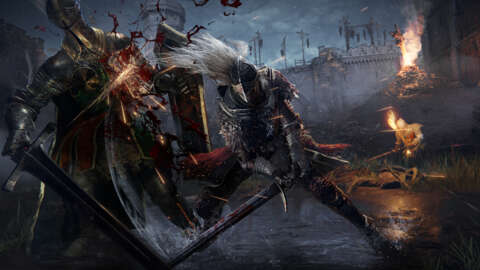 Developer From Software has teased some sort of online multiplayer for Elden Ring, as a fact sheet that was released after the latest trailer for the game vaguely mentioned a more social side to the game.

“Traverse the breathtaking world on foot or on horseback, alone or online with other players,” the release read. It’s not clear how social FromSoftware plans for Elden Ring to be, as no other details on multiplayer were mentioned beyond that single line. Other sites have referenced a fact sheet that mentions four-player support, but the version we saw didn’t mention that number specifically. We’ve reached out to Bandai Namco for further comment.

Other more concrete features listed include “shadowy, complex dungeons that are connected seamlessly,” dynamic weather systems on top of a day-night cycle, and NPCs who could be great allies in your journey or adversaries with profound backgrounds.

You’ll also be able to create your own custom character and define your playstyle by experimenting with a wide variety of weapons, magical abilities, and skills found throughout the world.

Bandai Namco also added that it aims to develop Elden Ring outside of games, as it outlined plans to push its latest intellectual property into other areas.

“We will continue to develop Elden Ring not only as a game but also in a variety of other areas in order to deliver the worldview and charm of this title to our fans around the world,” CEO Yasuo Miyakawa said.

Two years after it was first revealed, Elden Ring got its biggest update yet at the Summer Game Fest kick-off show this week. Not only was actual gameplay shown off for the Hidetaka Miyazaki-directed RPG, but Elden Ring’s January 2022 release date was also confirmed. Elden Ring will be released on PC, PS4, PS5, Xbox One, and Xbox Series X|S. For players hopping from old-gen systems to the latest consoles only next year, a free upgrade will be available.

If that’s too long of a wait, you can check out our detailed breakdown on the new trailer to help ease the wait until January.