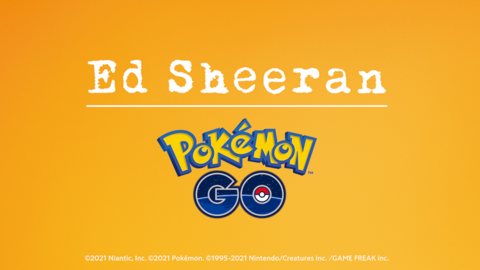 Singer-songwriter Ed Sheeran has teased a collaboration with Pokemon Go. Unfortunately, there are no details to go on at this point, but it’s a safe bet to assume the partnership is about music.

The 30-year-old singer from England is one of the most popular and successful artists on the planet, so whatever he’s cooking up with Pokemon Go, it’s sure to get a lot of attention and interest.

Sheeran is a known fan of Pokemon, saying back in 2011 that Pokemon Black for the DS is “wicked.” Earlier this year, Sheeran said in an interview with Spanish streamer Ibai Llanos (via Nintendohill) that he met with the creator of Pokemon, who gave him a letter of some kind. Sheeran also confirmed that his favorite starting Pokemon is Squirtle.

2021 marks the 25th anniversary of Pokemon, and The Pokemon Company released a special album featuring songs from artists like Post Malone, Katy Perry, and Lil Yachty.

Pokemon Go is still going strong, but the same can’t be said for all of Niantic’s games. The company recently announced plans to close Harry Potter: Wizards Unite. Niantic’s latest Pokemon Go-style game is Pikmin Bloom, which was only just recently released.

Ed Sheeran Will Perform Inside Pokemon Go Next Week