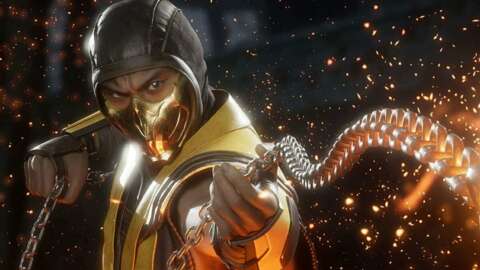 While the 30th anniversary of Mortal Kombat’s release may not be until next year, this year marks 30 years since development started on the iconic fighting game, as co-creator Ed Boon pointed out on Twitter. The developer, who also voiced Scorpion in the first few Mortal Kombat games, has used the anniversary to share a behind-the-scenes moment from the classic game.

A video posted by Boon shows filming underway on Scorpion’s movesets, capturing footage that would later be digitised into the game. During the session, Boon can be heard spitballing on a new move, beginning with an excited “you know what would be a cool-ass move?”

Mortal Kombat will be 30 years old in 2022. But 2021 marks 30 years since we actually BEGAN working on the game. To celebrate, it seemed like a fun idea to share some behind-the-scenes stuff. This clip shows how we created Scorpion’s iconic (GET OVER HERE!) spear move. (1 of 9) pic.twitter.com/3f1tdvjG9R

What came out of that improvisation was Scorpion’s spear, better known as the “GET OVER HERE” to most players, thanks to Boon’s voice lines. Boon explains that, despite how the video appears, a lot of prep happened before the video shoots, but the developers still sometimes improvised moves on the fly. Throughout the two minute video, you can see the off-the-cuff suggestion quickly being refined into what has become one of the franchise’s most iconic moves.

One of those details was how fast Scorpion threw the spear, which had to be quick so he could catch opponents by surprise. This meant keeping the animation simple & very few frames. We also wanted the spear to pass over a ducking opponent, so we kept it at chest height. (3/9)

Boon also elaborates on the development process in the Twitter thread, explaining some of the tricks the team used to try and cut down on memory, which was pretty tight in 1991. The game’s use of palette swaps and recycled animations to save memory is pretty well known, and in this case can be seen in re-using frames for the victim’s reactions–even the dizzy stun animation after the character is pulled in is re-used from fatality animations.

We were so tight on memory, that we didn’t even capture any motions for the victim reactions. Instead we borrowed from their existing animation frames. You can hear us talk about reusing one of the victim’s “knockdown” animations when they initially get hit by the spear. (4/9)

While Boon said he can’t share too much about what’s planned for Mortal Kombat’s 30th anniversary in terms of the actual games, he has said that he hopes to release more behind-the-scenes videos like this one in the lead up to next year’s celebrations.