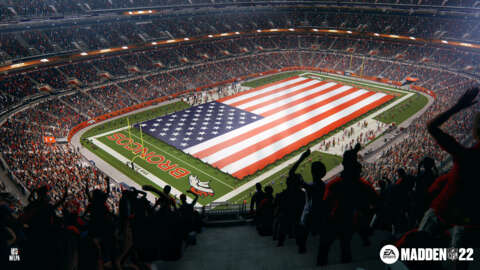 The NFL recently announced a deal with 2K Sports for new arcade-style NFL games, but EA Sports executive producer Seann Graddy isn’t afraid of the competition. In fact, he believes it’s a good thing that the NFL is cutting deals with other game developers.

EA’s own Madden series remains the exclusive developer of simulation-based NFL games, so when players want that type of experience, Madden is there for them.

“As far as the other products that [the NFL is] working with, I honestly think it’s a good thing for the industry and the market because you’re seeing more players engaging with with the NFL and getting excited about the league, getting excited about players,” he told GameSpot. “And when they want to get the simulation experience, they come to Madden. So I think it’s a good thing.”

Graddy went on to say that Madden has succeeded in recent years in expanded the market of “football fandom” across its various modes. Its newest one, The Yard, offers a more stripped down take on the game, and EA is further investing in this mode in Madden NFL 22.

“I almost see Madden as a football amusement park where you can come in and play a lot of different ways. Over time, if you’re playing Madden one way when you’re 15, 17, 18, may not be the same way you play it when you’re 28, 30, 35. I think that relationship is healthy [with the NFL],” he said.

2K’s own NFL game was recently delayed, but it heralds the return of what was once a very popular NFL 2K series. Under its new agreement with the NFL, 2K will make arcade-style NFL games. That’s an important distinction because EA Sports remains the exclusive developer of simulation-style NFL games with its Madden NFL series.

The new NFL game from 2K will have the names, numbers, images, and likenesses of more than 2,000 current NFL players, which is a big deal.

The NFL is also working with Skillz on a game jam of sorts to create even more NFL games for mobile, so the league is clearly interested in growing the reach of NFL in gaming.

Going back to EA, the developer just announced Madden NFL 22 with Tom Brady and Patrick Mahomes on the cover.