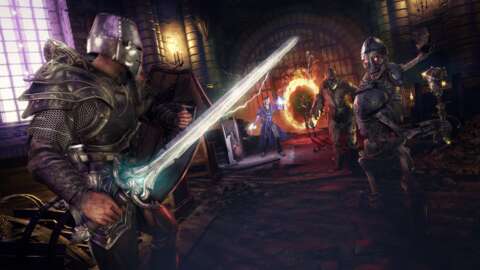 Techland is finally delivering a more complete Hellraid experience, just not how you would expect. The currently on-hold game from Techland was revived in Dying Light last year as a piece of DLC, and as of today, has been updated to include a full-on story mode.

Previously, the Hellraid DLC for Dying Light would let players escape out of the game’s zombie-infested world through an arcade cabinet. They would be teleported into a fantasy world, and instead of bashing up zombies, they could beat the bones off of some walking skeletons and other undead ghouls. However, it was all rather directionless, simply putting players through a dungeon of enemies.

A new update today for the DLC specifically changes that. An all-new story mode has been added to the piece of extra content, along with new weapons, zones, and a suite of visual improvements.

The story mode for Dying Light Hellraid will task players with saving a mage from Ba’al’s Temple. Who they are and what they’re doing there is for players to find out. If you don’t have the Hellraid DLC for Dying Light, it’s currently on sale on Steam for $7. On both the Microsoft Store and PlayStation Store, the DLC costs its full price of $10.

Dying Light 2: Stay Human is also just over the horizon, with a stream last month announcing a release date for the game. The Dying Light sequel is set to come out on December 7 and will feature a changing world based on player choices.