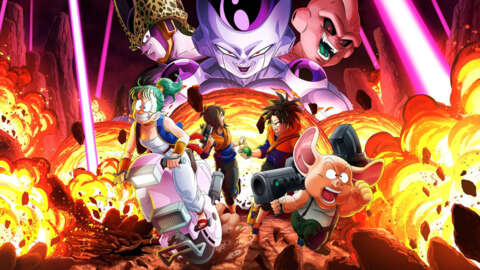 Whenever a new Dragon Ball game is announced, it’s usually a safe bet that it’ll follow the storyline of the manga series and anime adaptations, sticking to a tight script of action and familiar plot beats. Dragon Ball: The Breakers on the other hand, may just be the freshest and most horrifying take on the franchise, as Bandai Namco’s latest game set in that franchise is going for a more suspense-oriented route.

In the debut trailer for the game, Bandai Namco describes Dragon Ball: The Breakers as an “asymmetrical multiplayer” experience. One player assumes the role of one of Dragon Ball’s greatest villains–Cell, Frieza, or Majin Buu–while several other players control far more fragile humans and Oolong the shape-shifting pig. Spoiler alert: Even with a bazooka, players won’t be able to put up too much of a fight against a walking extinction event who can shatter an entire planet if they’re in a bad mood.

Rounds consist of seven survivors attempting to escape another player who controls a Dragon Ball villain. These games take place in a temporal seam that exists outside of normal space-time. Survivors don’t have any superpowers and must rely on various power-up items, weapons, and pilotable vehicles to battle and evade Cell, and the only way to escape is to find the Super Time Machine. The player who takes control of the raider can power up once several survivors have been defeated.

While it’s not shown how Frieza powers up in this game, the trailer does show Cell using his infamous Android absorption technique to grab a player and use them to achieve his Perfect form. At least he’s not drinking people in this game. Don’t watch this clip if you’re not a fan of anime body horror.

Players can also design their game avatars by using unlocked Survivor skins and decorative equipment earned with in-game credits or via optional in-game purchases, while save data from Dragon Ball: Xenoverse 2 will also link with the game.

Bandai Namco says that details on a closed beta network test are coming soon, and that Dragon Ball: The Breakers is coming to PS4, PS5, Xbox One, Xbox Series X|S, Nintendo Switch, and PC in 2022.