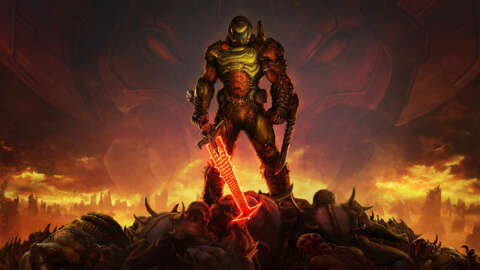 Doom Eternal was one of the best-looking games of 2020, and at Nvidia’s Computex keynote address, developer id Software’s gory first-person shooter took to the stage to show off the latest RTX enhancements that had been added to it through new PC gaming hardware. The gameplay demo showed off Nvidia’s RTX 3080 Ti GPU and ran at 4K with ray tracing enabled.

This is the first time that Doom Eternal has been seen with ray tracing effects added, which creates a number of improvements to the idTech engine-powered game that results in more natural and realistic lighting. It’s worth noting that the footage above was running without Nvidia’s magical AI-based image upscaling technology, Deep Learning Super Sampling, running in the background.

With DLSS activated, you’ll be able to enhance image quality up to 4K from a lower resolution provided that the game supports the software. Currently, there are up to 130 titles that can make use of DLSS, with Red Dead Redemption 2 and Rainbow Six Siege also being added to that list.

Doom Eternal recently wrapped up the saga of the Doom Slayer in the two-part Ancient Gods expansion, but id Software isn’t done yet with the series and has teased that the franchise still has more stories to be told. Executive producer Marty Stratton revealed in an anniversary video for Doom Eternal that fans should “stay tuned” for “more Doom Eternal updates” that are coming in 2021.

What those updates might contain isn’t clear, but with Microsoft and Bethesda’s joint press conference kicking off a very busy June for the industry, that’s as good a stage as any to reveal what’s next.