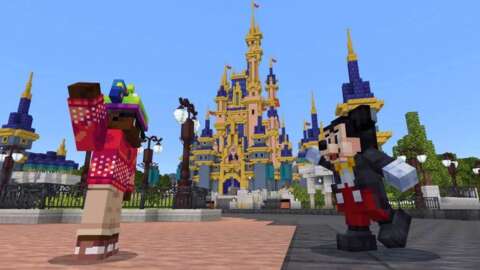 As part of the celebration of Walt Disney World’s 50th anniversary, Disney is releasing a huge Minecraft DLC that will let players explore a virtual version of the Florida theme park. The pack includes a map that recreates Disney World’s Magic Kingdom, complete with character meet and greets, player skins, and even a virtual version of the park’s iconic fireworks show.

The map recreates many of the park’s popular attractions, including Big Thunder Mountain Railroad, Haunted Mansion, Space Mountain, Jungle Cruise, and Pirates of the Carribean, making it a tempting proposition for Disney World fans who have been kept away from the real-world park due to the pandemic.

The DLC pack includes 29 Disney and Pixar characters that players can meet and greet, as well as 25 different Disney-themed skins for players to dress up in, as well as character creator items such as the iconic Mickey and Minnie Mouse ears.

The DLC pack is available on the Minecraft Marketplace for 1340 Minecoins, which is worth a little less than $10. The DLC can be downloaded by accessing the Marketplace on whatever platform you use to play Minecraft.